HICKMAN CLEANS UP AT ULSTER GP 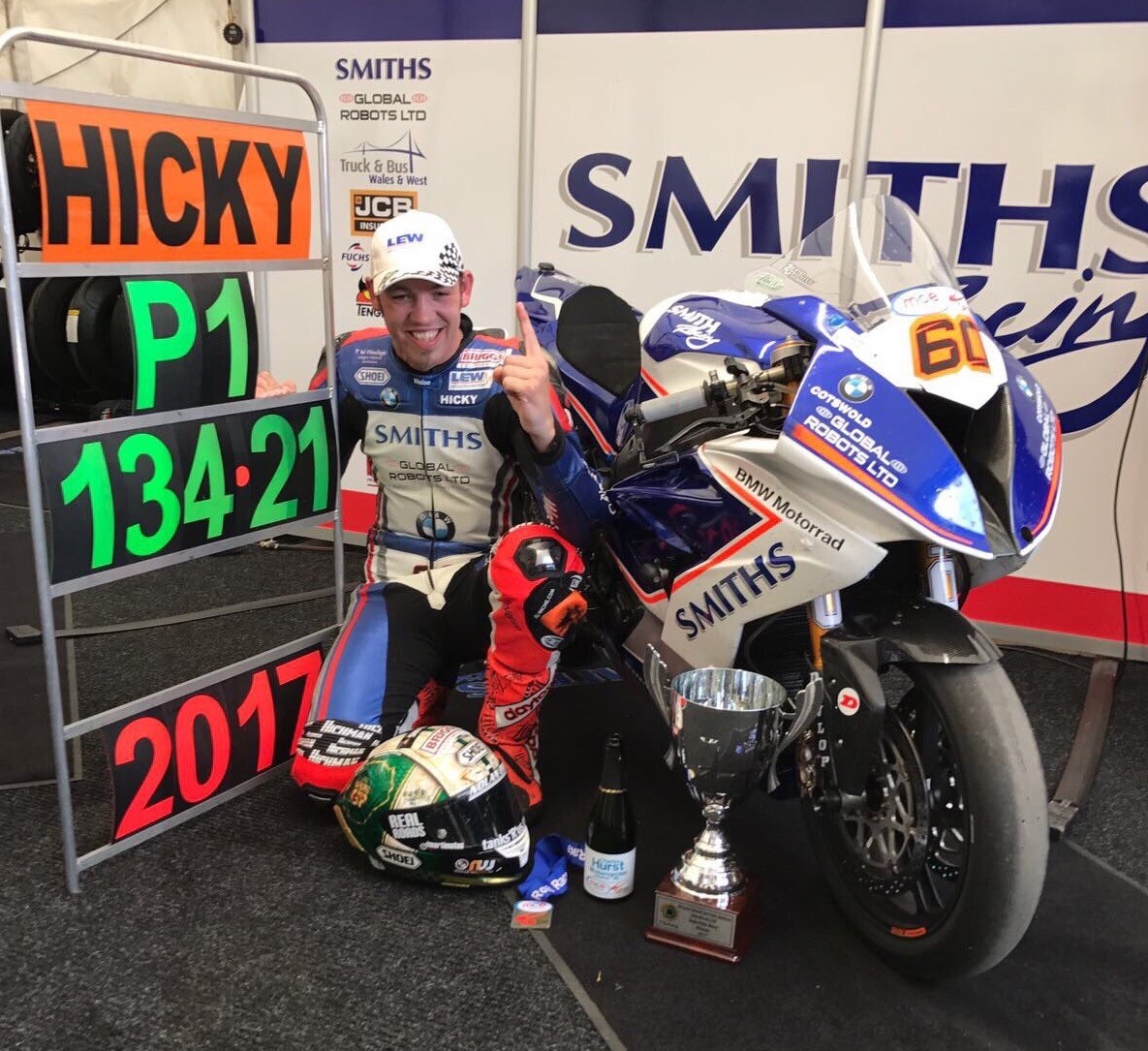 What a week for Louth’s Peter Hickman who recorded a win and second place at Thruxton on Sunday going on to secure pole position for all his races at the Ulster GP before taking four wins and a second place at the high profile International Road Racing meeting. Not satisfied with all that he walked away with the Man of the Meeting award at Thruxton and again at the Ulster GP.

Peter was in fine form during qualifying for the Ulster GP and secured pole position on the Smiths Racing BMW and Trooper Triumph for every race.

First up was the Dundrod 150 Superbike race on Thursday where he started from pole and took a lights to flag victory not only taking the win but he also became the fastest road racer in the world when he set a new outright lap record at 134.210mph.

Hicky said: “It’s great to start with a race win and mega to break the outright lap record so early in proceedings especially as I did it all by myself with no slipstream to help me. It’s hard to break away around here but I thought if I could get my head down in the first couple of laps, I might be able to do that and the race went exactly to plan. I had a near four-second lead at one point so was able to manage the race in the last two laps. It’s been faultless so far and to be fastest in every class is testament to the work being done by the whole Smiths Racing Team.”

Next up was the Ulster GP event on Saturday where Hicky was out in the six lap Superstock race. He was quick to get away and he and Dean Harrison soon began to make the break. Hicky pulled clear from Harrison and brought the Smiths Racing BMW home for his second win of the weekend.

It was the first of two Supersport races next and what a race it was. Bruce Anstey was quicker out the blocks but Hicky on the Smith’s Racing, Iron Maiden Trooper Beer Triumph took the lead half way around the first lap and crossed the line to start lap two just 0.2s ahead of Anstey. The pair pulled away from the pack and places were frequently exchanged until the final lap when Hicky took the lead at Deer’s Leap and held his line at Lindsay hairpin to cross the finish line a 10th of a second ahead of Anstey.

The big race of the day was the Superbike race and Hicky got the hole shot from Conor Cummins, Bruce Anstey, Dean Harrison and Dan Kneen and the five riders quickly made the break. First Cummins took the lead then Anstey then Hicky which made for a close and exciting race. But in the end Anstey just staved off a last corner attack from Hicky to take the win by two tenths of a second.

The second Supersport race was just as close as the first affair with Hicky taking the lead from Michael Dunlop and Anstey. But the red flag brought the action to a halt and at the restart it was Dunlop who took the lead, but Hicky snatched it away mid lap and tried to make the break. Although he led throughout the rest of the race he didn’t have it all his own way as he was chased all the way by Harrison, Anstey and Lee Johnston with just half a second separating the four riders. But Hicky was not to be denied his win and held off the challenge to cross the finish line just 0.3s ahead of Anstey with Harrison following in third place.

Hicky said: “I was trying to get away like I did in the first Supersport race but it wasnt to be. I knew the others would be on it but it was a really good race. I really enjoyed riding with the boys and it was great to actually finish on top. It is absolutely fantastic for Smiths Racing and Trooper Triumph. Its a shame I wasn’t close enough in the Superbike race to get the win but to get the double on the Triumph is absolutely fantastic.”

But the final race of the day didn’t quite go to plan as although he got the hole shot and was building up a small lead the BMW engine let go and Hicky was forced to pull in.

He said: “It’s been an awesome day and a massive thanks to the team as everything’s been spot on throughout. I’m obviously over the moon with a hat-trick of wins in what were extremely tough, close races and that’s always the case at the Ulster GP. To win a race here, you know you’ll have to fight all the way to the end and getting a break is near impossible. I tried my best to make a getaway in all of the races but it only really came off in the Superstock race when there were a few damp patches. I led most of the laps in most of the races and was happy to be out front and although we had a problem in the final race, we can’t be disappointed at all. It’s been a mega day’s racing so thanks again to the team.”

Hicky was presented with the Man of the Meeting award for his fantastic performance.

Its back to domestic duty this weekend with a round of the MCE British Superbike at Hicky’s local track of Cadwell Park. Last time out he secured a win and a second place and he will be seeking two more top results at /Cadwell to maintain his third place in the overall standings as we near the end of season shootout where the top six riders battle it out for the title.

pics show Peter after his first win. then the Supersport podium l-r Bruce Anstey, Peter Hickman, Lee Johnston.
Hicky with the trophy for Man of the Meeting and an action shot from Baylon McCaughey.