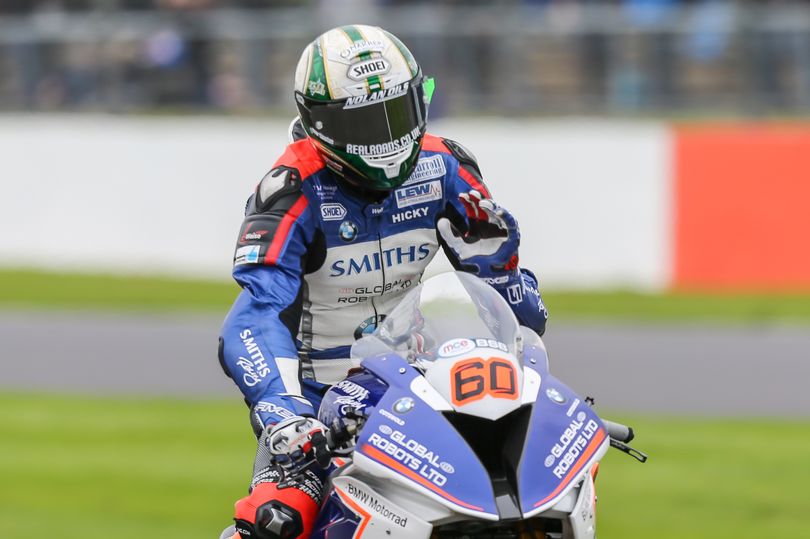 Race ace Peter Hickman will line-up in the Showdown phase of the British Superbike Championships for the first time this year – despite a dramatic crash at Silverstone.

The Louth-based rider booked his place in the top six of the standings in the first of three races at Silverstone last weekend.

After a solid second race in which he came seventh, he came off the track in the third and final race of the triple header.

In wet conditions, he slid off the course and tumbled off his bike as sparks flew from underneath his Smiths Racing BMW machine.

Thankfully, Hickman was okay – and will now focus on the title-deciding Showdown.

Dan Linfoot became the ninth different race winner at Silverstone on Sunday as he mastered the wet conditions to claim his first victory in the MCE Insurance British Superbike Championship.

But in the top six shake-up, it was Jason O‘Halloran and Jake Dixon who completed the final line up after the third race.

Defending champion Shane ‘Shakey’ Byrne had confirmed his place after the opening race on Saturday but tensions were high with the final five places up for the taking in the final two races of the main season.

In the second race of the weekend, Byrne led the pack from Christian Iddon, but Guintoli was pushing and soon was attempting to make a move on the Be Wiser Ducati rider for the lead after passing his Tyco BMW rival.

There was more drama for Leon Haslam as the JG Speedfit Kawasaki rider crashed out at Stowe; he had been fighting his way through the pack from the back of the grid, but despite his second non point score of the weekend after also crashing out of race one yesterday, he was able to confirm his Showdown position.

On the fifth lap, Guintoli hit the front of the pack on board the Bennetts Suzuki, but it was frantically changing as Brookes then stole the position to lead Guintoli and Byrne with a freight train of riders including Iddon and James

Ellison, who had carved his way through from the back of the grid.

The positions were chopping and changing at the front, with every point crucial for a place in the Showdown, but for race one winner Glenn Irwin his race was over when he crashed out unhurt.

Andy Reid and Martin Jessopp then also crashed out, bringing out the BMW Safety Car, and just before the race was due to resume Shaun Winfield suffered a blow up, leaving oil on the circuit which then bought out the red flag.

Showdown ahead of Ellison, who delivered a gritty performance from starting last on the grid.

Byrne completed the podium to add to his points tally.

Guintoli scored his best result of the season in fourth ahead of Showdown Six contender Jason O’Halloran and rookie Bradley Ray. Iddon held on to seventh ahead of Hickman, who confirmed his place in the Showdown with eighth place.

The final two Showdown positions were then up for the taking in the final race of the day at Silverstone with O’Halloran, Luke Mossey, Dixon and Iddon all still in contention.

It all changed in race three with completely wet conditions, but for Haslam his woes continued as he was unable to make the start due to a technical problem.

Then the tension heightened again as Honda Racing’s O’Halloran crashed out on the opening lap, leaving himself vulnerable in the Showdown with Dixon, Iddon and Mossey all capable of claiming the positions.

At the front, Brookes had hit the front of the field ahead of Byrne and Ellison who were instantly dicing for positions.

On the second lap, Brookes had a moment which pushed him wide and allowed Byrne and Ellison to carve through.

However, a lap later, there was disaster for Ellison as he crashed out unhurt.

Brookes was then the next rider to crash out of contention as he fought for the lead, leaving Byrne in the lead for the Be Wiser Ducati team with Dan Linfoot in third and Hickman holding fourth after confirming his Showdown position in the earlier race.

On the sixth lap though, there was a crash from Byrne and he slid out of contention at Farm, leaving Linfoot to master the conditions and edge out an advantage over the chasing pack to claim his first win in the series.

Meanwhile, the positions were changing throughout the field as Michael Laverty had moved into third place as Iddon moved into second and potentially secured his position in the Showdown Six for Tyco BMW. However, on the eighth lap, Iddon had a moment and crashed out at Club, ending his hopes of a position in the top six for the Showdown.

Dixon then had the advantage and he held third place to the finish to secure his place and become the youngest ever rider to line up in the Showdown, with O’Halloran still holding enough points despite his non finish to complete the Title Fighter line up as Mossey crashed out.