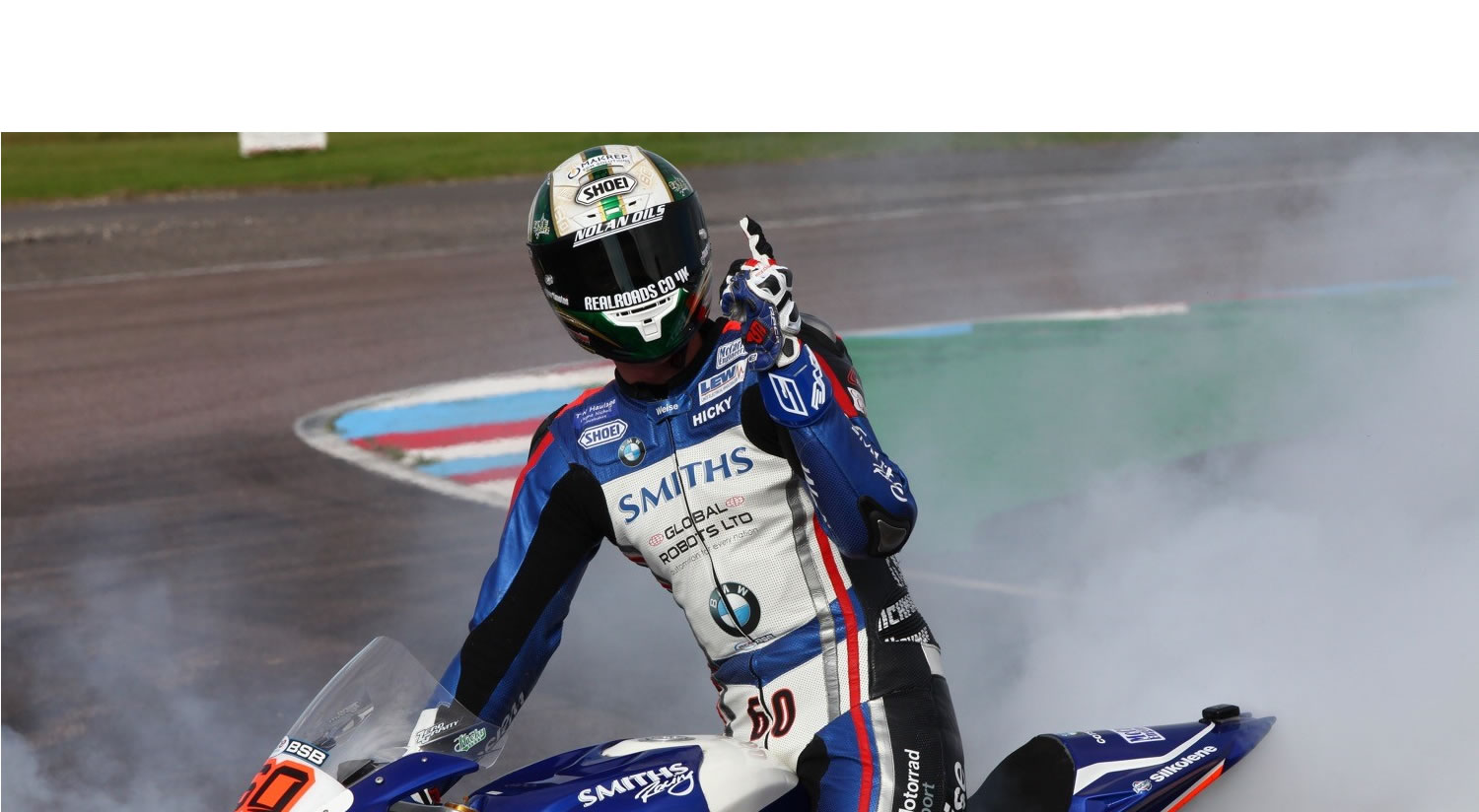 Peter Hickman rode to a win and a second place in round seven of the MCE British Superbike championship at Thruxton on Sunday to pick up 45 championship points and move to third in the championship standings on 164 points. He was also named rider of the day for his heroic efforts.

The Louth rider was always in the top four throughout free practice and qualifying and when he completed his solo Superpole lap he rode well to claim second place and a front row start to the first of the two 18 lap MCE British Superbike races at the Hampshire circuit.

He said: “It has been a while since I did a Superpole lap, the first was last year and then the second was at Donington in the first round this season. The Smiths BMW team has been working really hard and we have been really strong this last couple of rounds. We still feel a bit robbed of a podium finish at Brands Hatch so we need to make amends here at Thruxton. We are going the right way about it with a front row start to race one so bring it on!”

As the first race got underway Hicky got away well and settled into second place behind pole setter Jake Dixon. His progress was thwarted for a while as the course car led the riders around for a few laps because of a crash further downfield. Once the car left the track Hicky took the lead which he held for six laps until Josh Brookes passed him on lap 15. He was hassled by Dixon towards the end of the race but finally shook him off to cross the finish line for second place, his first podium of the current campaign.

The pace had been hot and Hicky had recorded the fastest lap of the race which gifted him pole position for the second encounter. Again the pace was quick and the battle was on between Dixon, Hicky and Shakey Byrne for the lead which was exchanged between the three until on lap nine Hicky took the lead at club chicane. By this time Byrne had faded and Josh Brookes had come through to join in the battle at the front. With four laps to go, Brookes took the lead and both he and Hicky pulled away from Dixon. On the penultimate lap Brookes made a mistake and crashed gifting the lead to Hicky who continued to pull away from Dixon to take the chequered flag for his second podium finish and his first win for Smiths Racing BMW.

A delighted Peter Hickman said: “I’m obviously delighted to have taken my first win and podiums of the season but even more delighted to give the Smiths’ team their first ever BSB win. It’s absolutely mega for all of us and although it’s a small, family-run team everyone works so hard and it’s brilliant for them to be rewarded for all their efforts. I felt comfortable out front in race one, although it’s never easy setting the pace but I was over the moon with second place. Race two followed a similar pattern and although Jake got by me at one stage, I could see his rear tyre was used more than mine so knew he wouldn’t be a problem although Josh was obviously more of a threat. It’s a shame he crashed out but that’s racing and hats off to my guys, they’ve got the bike set up so well which makes my life a lot easier. A first and second place means it’s been a brilliant day and third place overall now is the icing on the cake. Then to be named Eurosport Rider of the Day was just great.”

The next round is at Hicky’s home circuit of Cadwell Park on August 20 where he has won a Superbike race before and also been on the podium. But prior to that he travels to Ireland to compete in the world’s fastest road race, The Ulster GP where practice takes place on Wednesday and Thursday with racing on Thursday and Saturday.