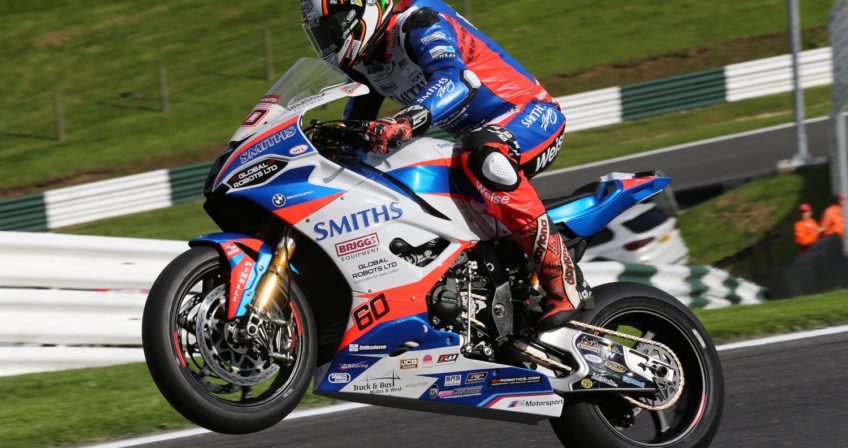 Peter Hickman rode to a brace of fifth places at his local circuit of Cadwell Park in round eight of the British Superbike championship and moves up into seventh place in the rider standings, just one point away from Andrew Irwin who currently holds the final showdown position of sixth.

Hickman had a few niggles with the Smiths Racing BMW during free practice and was thwarted in qualifying as when on his flying lap in the second stage of qualifying he came across a slower rider at the bottom of the mountain and had to slow. He ended the session in 11th place and instead of the front row start he was chasing had to be content with a fourth row grid position for the first race.

As the race got underway Hickman made a swift start, moving through to eighth on the first lap. He made further progress through to fifth on lap six before being passed by Scott Redding. But on the penultimate lap Christian Iddon made a mistake and Hickman overtook him to secure fifth place which he held to the chequered flag.

Starting the second race from the second row Hickman was fourth on the opening lap but was overtaken by Iddon and although he was closing in on Iddon in the second half of the race he couldn’t make a pass on him and remained in fifth place to the flag.

Hickman said: “I’m happy enough with how the weekend has gone especially from where we were at the beginning when we were having a few issues. It took us a long time to get to the bottom of everything and the boys were up all of Saturday night changing to a third engine, but it ultimately paid dividends as that was what allowed us to be where we were on race day. It was difficult coming from so far back on the grid in race one, but I put in a few overtaking manoeuvres and a couple of riders dropped out so fifth was a good result especially as it put me in a better position for race two. There, I got away well and just sat behind Christian but whilst I was stronger in some areas, he was stronger than me in others. I was in two minds what to do in terms of trying a pass, but I didn’t want to risk a crash and losing any points so settled for fifth. We’ve had a good haul of points this weekend and have gained a lot of ground on our rivals and are now just one point off the Showdown so with three races at the next round, we’ll be looking to clinch that top six place.”

The 22 points accrued from the two races at Cadwell moved Hickman up to seventh place in the overall standings and with Andrew Irwin crashing out of the second race Hickman has moved to within one point of him.

With three races at Oulton Park in the next round and 75 points up for grabs Hickman is in a strong position to secure a place in the end of season showdown for the title.