FINAL ROUND AT BRANDS HATCH FOR HICKY 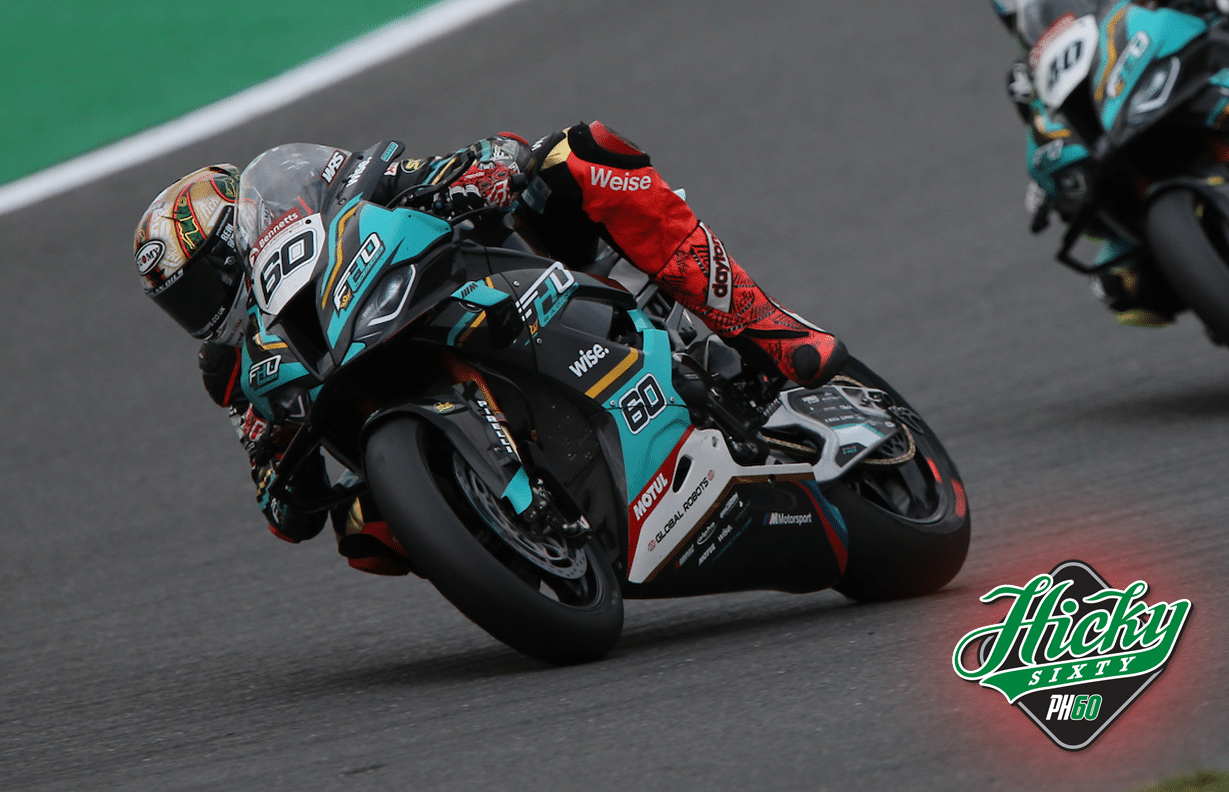 Hickman and the FHO Racing BMW Team headed to Brands Hatch for the final round of the British Superbike season for 2021.

Saturday brought damp weather again for Qualifying. Peter opted for the all-new Pirelli Supersoft wet tyre and it proved costly, running out of grip quickly on the drying sectors, he qualified 14th. Very frustrating to be so far back on the grid for Race One.

Race One – 16 laps
Starting on Row 5, behind Jason O’Halloran and Josh Brookes, Hicky got a great start.

By lap 4 he had climbed to 10th behind Josh Brookes. The safety car was deployed on Lap 5 after Josh Owens came off at Hawthorns. For 2 laps the pack started to bunch back up and when the race restarted on lap 8, Hicky got the hammer down and passed Brookes into Druids, chasing down the Irwins. On lap 11, Hicky got by Glen and on the 12th lap, he passed Andrew. Now O’Show ahead, he closed him down and looked like he would pass him, but it was not to be. Hicky crossed the line in 5th.

Race Two – 20 Laps
Hicky made a good start from P6 on Row 2 for Race Two behind Irwin and Iddon. This was the start of a few frantic laps. Iddon made a mistake at Clearways, Hicky took advantage and was heading up the inside but was side by side with Irwin, they were almost touching as they came across the line to start lap 2. Hicky wasn’t giving up, as they made their way around Graham Hill bend and onto the Cooper Straight, he pushed through and took 5th place back.

Breaking the tow to Andrew Irwin, Hicky got away with Iddon and O’Halloran but unable to catch them Hicky brought the M 1000 RR home in 5th.

Race Three – 20 Laps
The final race of 2021 season and Hicky started on the front row. The top 8 riders headed into Paddock Hill for the first time and Hicky got jumped by O’Halloran and pushed back to 4th. Bridewell, Iddon, Mackenzie and O’Show go 4 abreast at the top of Paddock Hill at the start of lap 2 and Hicky was back to 5th. With MacKenzie and Bridewell breaking away, Hicky and Jason were battling for 4th place. Peter took the advantage and dropped the McCams rider back to 5th. Iddon was then the man to get past for the podium place. Lap by lap went by and 0.03 between them. By Lap 16, Hicky was caught by Jason and pushed down to 5th. Buchan and Brookes then caught up. Buchan and Iddon went down at Paddock Hill at the start of the last lap and Brookes got by Hicky as they crossed the line, Hicky taking 5th at the chequered flag.

Peter Hickman
“It’s been a fantastic year for myself and FHO Racing. Some of the infrastructure was in place already but really it’s a new team and a new bike as well with the M 1000 RR BMW. To finish as the top BMW is always a bonus, beating the factory team, as we are a private team at the end of the day. We’ve contributed a lot to BMW finishing 3rd in the Constructors Championship, as well as myself finishing 5th overall.

I want to say a massive thank you to Faye, Daz, Bucks and the whole crew as they have done a fantastic job. The bike has been mega. We weren’t too far away and we’re still making improvements even now. We learnt a little bit more again this weekend, it’s the last weekend of the season and yet we are still looking to improve, to understand just a little bit more.

It was a great weekend and again a fantastic year!

Thanks to everyone for your support, I’m looking forward to 2022 where we can hit the ground running!”