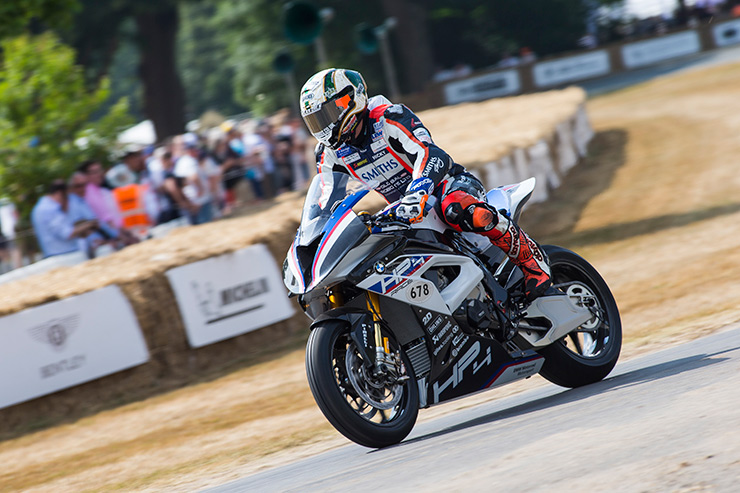 The Goodwood Estate, West Sussex, is known by all petrol heads. Regardless of whether you are passionate about four wheels or two, the Festival of Speed offers something for everyone.

Nestled at the heart of the South Downs Way and hidden in a glorious bowl, which appears to boast its own climate, Goodwood Estate offers a race track, golf course and stunning estate house. Every July, Lord March opens his garden and creates a play area for those of us who share a passion for speed.

Like the Isle of Man TT, it is a bucket list event, and it is full of great names across racing and racing history, although the drivers and riders are not the main attraction. The stars of the show are always the cars and bikes. From concept machines to the very beginnings of motoring, there is a representation from every genre of motorsport and engineering.

This year, following on from his outstanding IOM TT Senior win, Peter was invited by his sponsor, Ohlins, to showcase the TT record stealing Smiths Racing BMW S1000RR. He was also asked to ride the BMW HP4 Race up the hill and his personal sponsor, Andy Kirkwood of Global Robots, offered Peter the chance to ride Fred Merkel’s RC30 in the celebration of Forty Years of the World Superbikes. This was the first ever bike to take the Number One plate in WSBK, and the chance to ride such an iconic machine at such an iconic event was a real honour for Peter.

Peter Hickman: “Everyone knows Goodwood. It’s such a great event where the world of two and four wheels collide, and everyone is in awe of the machines and talent in the paddock. Being reunited with the BMW HP4 Race again was great. There is a video of me taking that bike around the Isle of Man in 2017. I loved it. To be able to ride the Fred Merkel RC30 was really mega. My sponsors, Global Robots, have worked with me and supported me throughout my career so being able to ride Andy’s (Kirkwood) pride and joy was just priceless. It’s a bit of a crazy weekend at Goodwood, but I got to meet so many fans and enthusiasts. I love the event and hope to come back again next year.”

Peter closed the Festival of Speed on the BMW HP4 Race with an epic burnout in front of Goodwood House. When asked if he would be riding at Goodwood Revival Peter said “I would absolutely love to ride at the Revival, it’s an incredible meet. However, with my focus on the Bennetts British Superbike Championship, I won’t be able to do it. Maybe next year if the dates work, I would love to be there.”

Peter now heads off for a few media and sponsor commitments then heads to Brands Hatch on the 19th of July for Round 6 of the Bennetts British Superbike Championship.