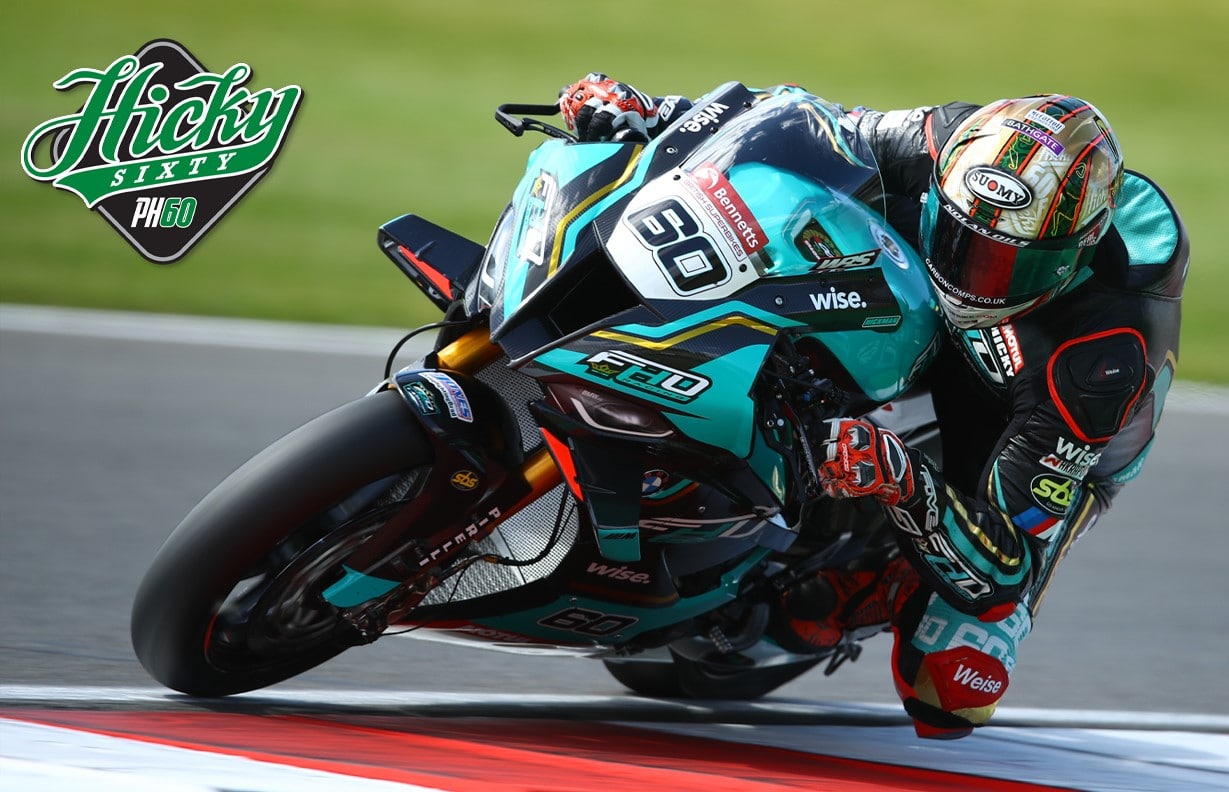 The National circuit at Donington Park saw the return of the British Superbike Championship for round 5 this weekend.

On Friday FP1 saw Hickman in 4th and a few changes for FP2 Hicky went P1 with the combined session time of 1:06.156s.

A really positive start for him and the FHO BMW team straight into Superpicks qualifying on Saturday.
The M 1000 RR was working really well and Hicky went into top spot with a 1:05.656s lap on lap five of the session and was looking like he would claim pole position until Jason O’Halloran set a 1:05.637s lap time with less than two minutes remaining on the clock, a 0.019s difference, so close!
Race One – 20 Lap

Hicky was happy with the bike after a great qualifying session and felt very strong for race one.
Full tank of fuel and new tyres the only change, Hickman lost ground straight away. Going down to 6th by the end of lap 1. A long race for Hickman, struggling with grip, hard to fight back at the guys passing him, he finished in 9th.

“Qualifying was absolutely awesome, the bike was mega all through FP1,2 and 3 and I was really happy with the bike it was doing everything that I wanted it to do.

But, we got into race one and it wouldn’t do anything I wanted it to do. We hadn’t changed a click on the bike and apart from new tyres and fuel, that was all we had done. I had no grip, it wouldn’t stop, a load of chatter, a very odd race for me. Obviously very disappointed and we will try and figure out what went wrong and try and fix it for tomorrow.”

Hicky got away well, with the Irwins, O’Halloran, Iddon and Mackenzie in close contention.
A battle ensued and riders exchanging places with every sector and lap, nail-biting stuff!

On lap 6, Hicky not only set a new fastest lap of the race and he claimed the lap record for the National Circuit with a great lap of 1:06:081s

Andrew Irwin and Iddon came together on lap 7, with Iddon going down. On lap 17 Glen came down battling with Skinner and Hicky had already pushed himself up into 2nd place ahead of O’Hallloran and Ray.

O’Halloran came back through to take the 2nd spot on lap 20. Danny Buchan then crashed heavily out for the race meaning the safety car was deployed and the race distance was extended to 28 laps.

The pack were all together as the safety car came in, Ray got the better of Hicky, pushing him down to 4th a lap before the chequered flag.

Starting from pole position, Hicky got away with Glen Irwin and rain started to fall.
The race was red-flagged.

Waiting for race control to make a decision on how long the delay would be, it started to dry and 2 minutes before pitlane reopened, the heavens opened and it was declared a wet race.

A real mixed bag of tyre choice options across the grid and Hickman went full wets.

Not having the data from any laps in these conditions, it was a gamble. The race was cut short to 20 laps and the track drying fast. Hicky struggled with the guys around him, ending the race down in 14th.

Another disappointing weekend really after all the potential to be on the box and even winning and it all came to nothing in the end. But overall a really positive weekend is the only way to look at it. The bike is really strong, I feel really strong, every session apart from the first race and the last race, with the wrong tyre choice, we were fast and at the front. It was my decision, so no one to blame but me. I chose the wets. The sighting lap gave me the impression it was going to be wet for at least half of the race, watching the water come off the bike in front of me. By the time we did the warm-up lap it was completely dry, so completely on me, wrong decision, just typical that another one by me has gone the wrong way.

Moving onto Cadwell, the bike is really strong and coming back to a track that has always been a good track for me in the past, so fingers crossed we can capitalise on that. So looking forward to, in two days time, being at the Party in the Park!