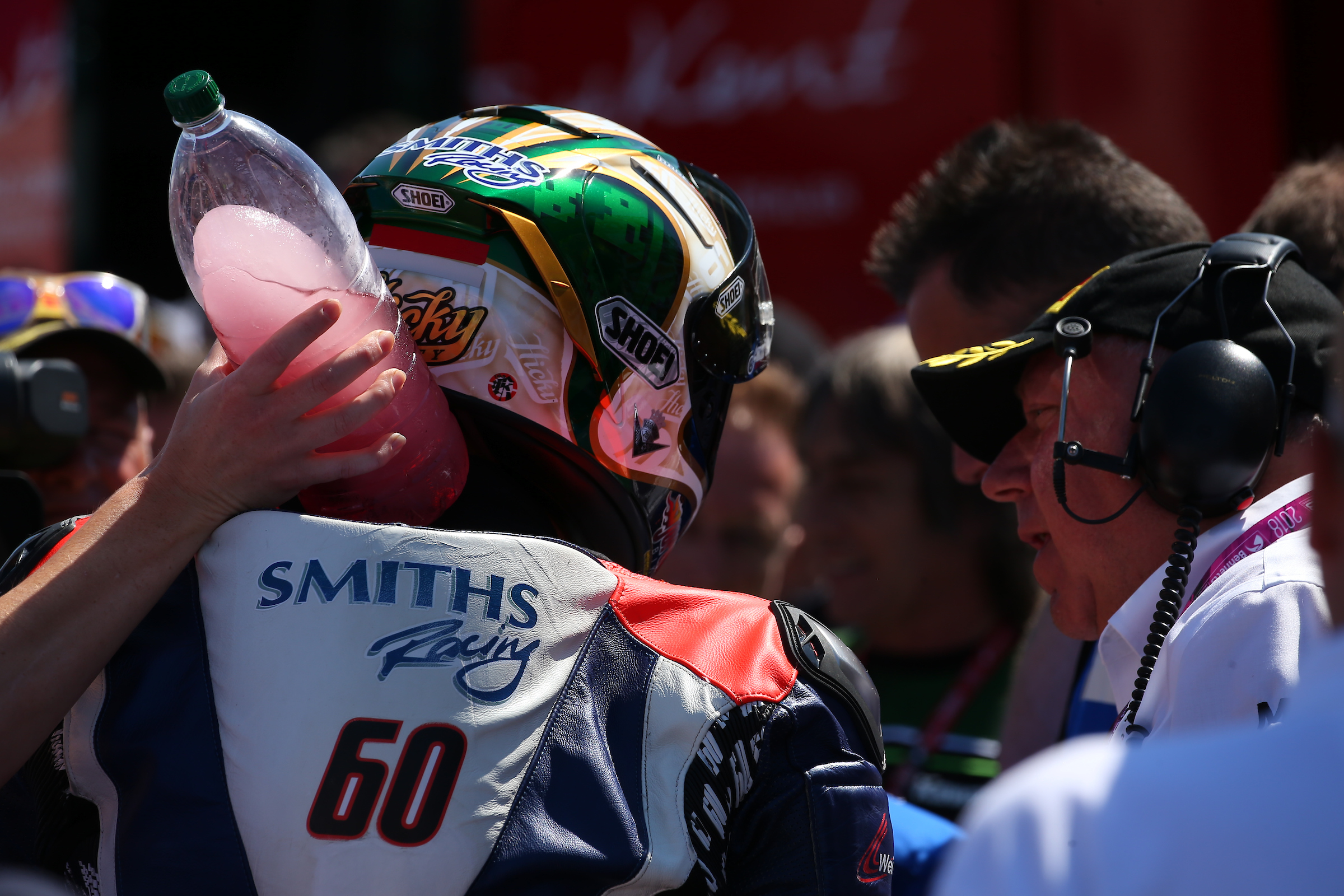 After being rushed to hospital following a collapse in his motorhome, Peter Hickman went on to take a double podium at Thruxton for the seventh round of the Bennetts British Superbike Championship.

You may remember us telling you that Peter wasn’t feeling well at Brands Hatch, assuming it was a head cold he went on with developing symptoms and rode the Suzuka 8hr. Believing he had caught Flu, Peter came to Thruxton battling a high temperature and body aches and pains.

On Friday the Smiths BMW team delivered a stunning bike set up for Peter. He finished the days testing in P1 on both sessions. Feeling confident the team went into Saturday’s qualifying with renewed vigour.

Qualifying didn’t go as planned for the Louth-based TT winner. With temperatures reaching the low thirties on Saturday, Peter struggled to get through the second session, qualifying in P11.

There was mounting pressure on the team and Peter to deliver this weekend after winning here in 2017. Peter knew this was a good chance for him to push on to Showdown contention. After a difficult qualifying, he returned to the motorhome and felt too ill to eat, so he went straight to bed.

Over the course of the evening, it became apparent Peter was suffering from more than just summer flu. The circuit medics were called shortly after 9pm, and the decision was then made to transfer him to hospital. He was taken, by ambulance, to Winchester and after hours of tests, it was discovered he had quite a developed kidney infection. The medical team at Thruxton, and the paramedics and staff at Winchester Hospital took great care of the 31-year old racer.

After receiving intravenous antibiotics and hydration all night, Peter was feeling better and began talking to the doctors about discharge. It was agreed at midday he was fit enough to leave the hospital. Returning to the track just an hour before the first Superbike race, Peter was cleared by the British Superbike team to race and got himself prepared for Race One.

A thrilled Smiths welcomed him into the garage, and within moments it was business as usual with Darren and the rest of the team sending Pete off to the grid. The parting words from his father, “If you don’t feel right, you come in. No arguments”

Completing the first lap in 13th place, the emotions of everyone in the garage could be felt. It had been a long night, and the race was set to be long too. However, as we reached lap six, Hickman was up into seventh. He sat here for the next ten laps but was producing fastest lap after fastest lap. This helped him close right in on the lead pack of six riders. Not content to sit behind them, Peter worked his way to fifth place by lap seventeen. The team were happy with his performance and had settled in for a fantastic 5th place when, on the chicane of the final lap, an incident between O’Halloran and Brookes allowed Peter to claim the final podium position. A massive celebration for the team and a stunning achievement for Peter.

Due to his lap times in race one, Peter was lined up on the second row in fifth position for the second 20-lap race. By the end of lap one, he was in sixth. However, after a masterclass of passes, he had moved into fourth place on lap six. By half race distance, he was sitting in third. Race leader, Brookes, had managed to break away from the pack with a two-second lead, while the chasing pack swapped positions, Hickman managed to grab P2 and then the hunt was on for Brookes. Each lap he narrowed the gap, and by the chequered flag, he was 0.3s off the Australian. Taking an incredible second podium of the day, this time in P2.

With 36 points gained over the weekend, Peter jumped to seventh in the overall championship, with just seven points between himself and the showdown position.

Peter Hickman: “I was discharged from the hospital at noon today, and it was a little touch and go on if we’d make it back from Winchester in time for the first race. To be standing on the podium by 2 pm is unreal. Mega. I’ve felt ill for the last couple of weeks and just thought it was a touch of man flu. However, Saturday night was horrible; I put it down to blood sugars or the heat, however, when I was whisked away in an ambulance I figured it was something more sinister. A kidney infection. I felt a little better today, came back to the circuit and gave it my best shot. I was a long way back in race one, but got my head together and kept chipping away, I did get a bit of luck on the last lap, but I think we deserved a little luck this weekend. Race two there was too much of a battle going on in the top five, which allowed Josh to get away. I had a great rhythm and managed to make a break of my own. P3 and P2 are fantastic after a poor start to the season. I am in Showdown contention, and that’s exactly where I wanted to be this weekend! Huge thanks to my team, Smiths BMW and everyone at Peter Hickman Racing. Also to the fans and the media who have been massively supportive this weekend.”

Peter was announced as the Dickies Man Of The Meeting and then jumped in the motorhome, heading straight to Dundrod for the Ulster Grand Prix.