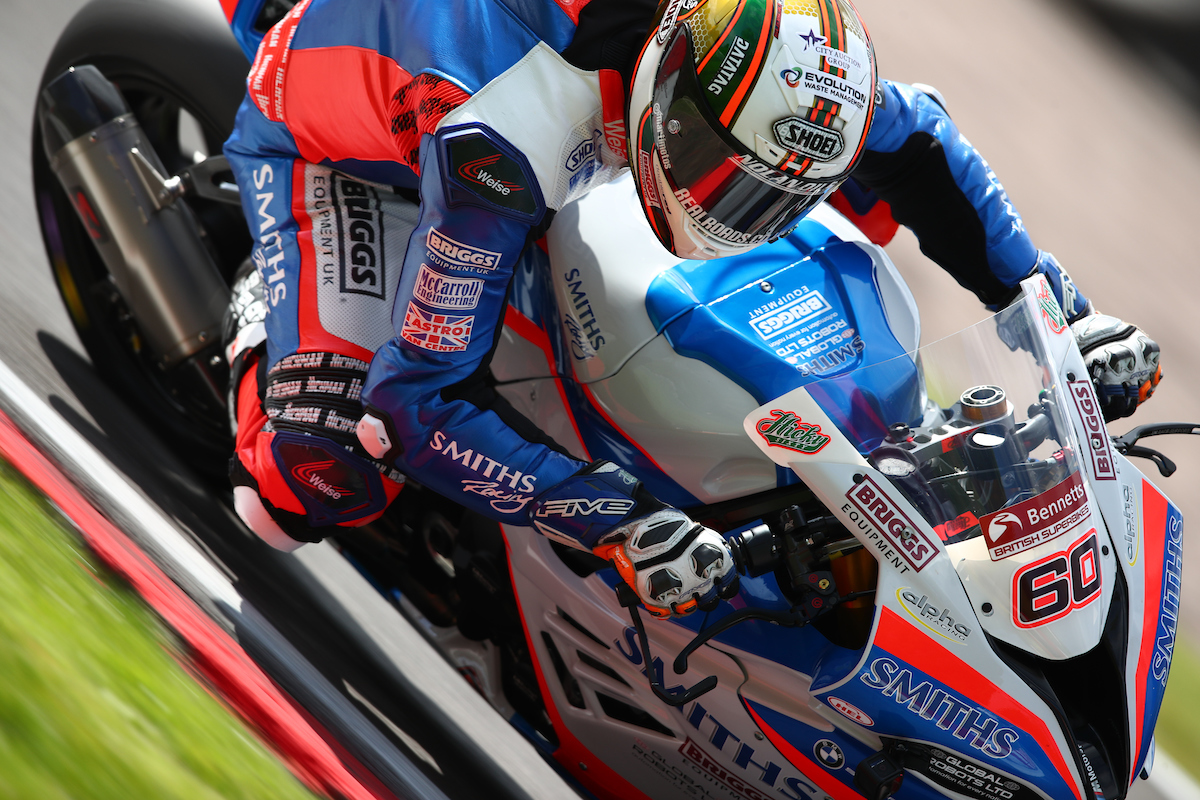 Peter Hickman enjoyed a solid weekend at the second round of the 2019 Bennetts British Superbike Championship, defying challenging conditions and controversial decisions at Oulton Park.

Finding a strong set-up for the winding Cheshire track is challenging. Saturday’s practice sessions delivered multiple red flags, and Sunday’s session was under wet conditions. Despite this, the Smiths Racing team hit the sweet spot through to qualifying and Peter managed to secure a front row position for Monday’s race one.

Race One was interrupted after the first sighting laps, as riders prepared on the grid for the flag to drop. This saw a delay to the start. The race eventually got underway; however, Hickman didn’t get the start he wanted which saw him lose four places and gave him a lot of work to do in the race.

Finding his groove, he continued lap two as the fastest man on track and with ten laps remaining he had taken 6th position, chasing former Moto GP star, Scott Redding, for 5th.

Unable to find his way around the other riders, Peter had to settle for P6 as the chequered flag fell. This pushed him up to 11th in the championship standings and gave him the confidence he needed in the new BMW S1000RR which showed podium pace throughout the race.

Race Two set off a little later than scheduled and saw Hickman and his Smiths Racing team line up on the second row of the grid. Unfortunately, the bike failed a tyre pressure test and the controversial decision to remove Peter from the grid, was taken. Leaving the Louth-based racer with a lot of work to do.

A strong start saw Hickman push his way up to P16 within the first two laps of the race. Once again showing the BMW had excellent racing pace, he positioned himself in the points with seven laps remaining. Making some bold passes in the final laps of the race, Hickman managed to carve his way into P11 and took the chequered flag.

Peter Hickman “It’s been a good weekend overall. Qualifying on the front row, which is brilliant. The team has got to grips with the new BMW S1000RR and delivered me a fantastic bike for this weekend. I found my rhythm on the bike, and everything came together for us. I didn’t have the best of starts in race one but managed to claw my way back to 6th and had the pace for the podium, which is promising. Race two saw a harsh penalty after we were taken off the grid for a discrepancy over tyre pressure. It’s one of those things. We started from the last row and ended up P11. We’ve learned a lot this weekend and confidence in the new BMW S1000RR continues to grow. Massive thanks to the team and all the sponsors.”

Peter and Smiths Racing leave Oulton Park in a stronger position than the 2018 season and now prepare for the start of the International Road Racing Season. He returns to Donington Park for Round Three of the Bennetts British Superbike Championship on the 24th-26th of May.