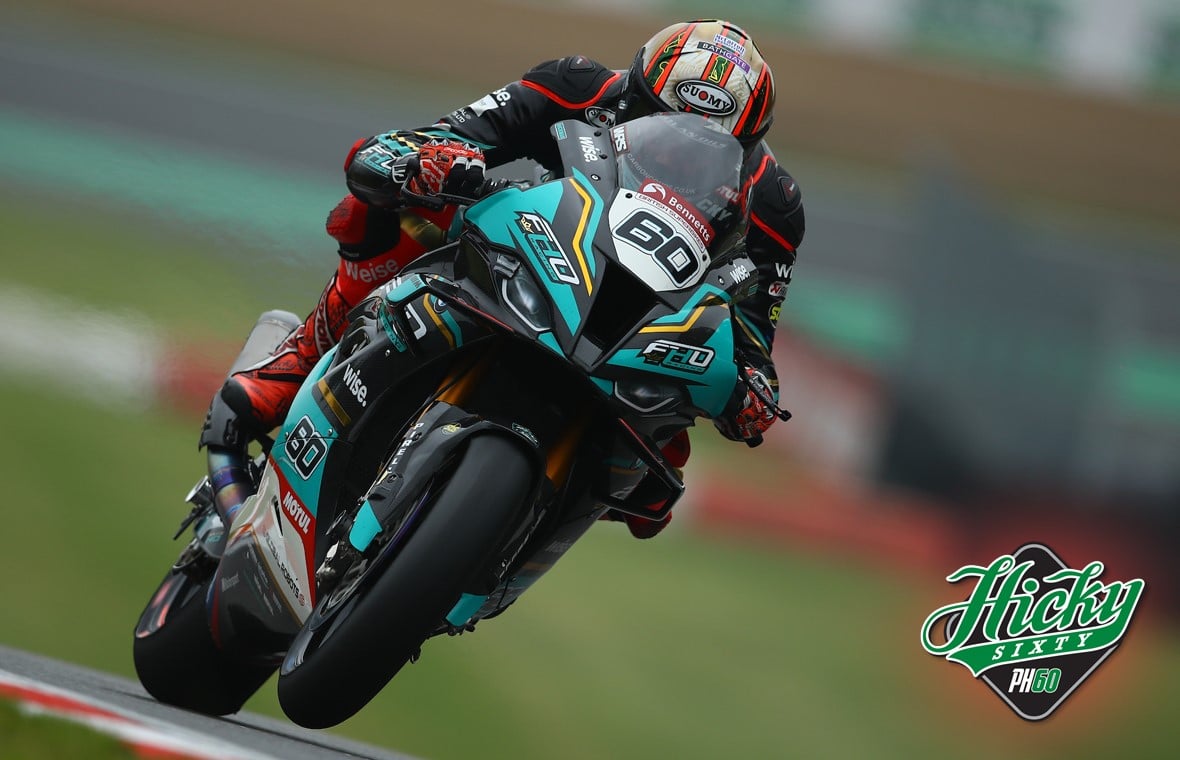 Hicky and the FHO Racing BMW team headed to Brands Hatch circuit in Kent for the third round of the 2021 Bennetts British Superbike Championship. Looking to put Knockhill frustrations behind him, Peter went into the weekend feeling positive.

During the free practice sessions, Hicky made a few changes, giving him a set-up ready for qualifying. Jumping straight into Q2, Hickman ended up qualifying P6, 1m 26.960s.

Race One – 12 Lap
Starting from row two, Peter had a tough start, dropping down the field a couple of places. As the race was about to start the second lap, it was red-flagged due to an accident. Our thoughts are with Brad Jones of course at this time.

The race restart was delayed and the team made changes, fitting a new clutch into a hot engine isn’t easy, great teamwork.

Finally, the race was restarted and Peter got away, but it was all in vain as Hicky crashed out on lap 2, exiting Surtees. Not the restart Hicky or the team were looking for!

Race Two – 20 Lap
Starting row 4, Peter headed into Paddock Hill Bend fairing to fairing with Jackson and a large pack of riders. During the first frantic few laps, Hicky exchanged places with Ray, Ryde and Xavi and then the group started to settle.

As Hicky reached the halfway stages, he started to find real pace, setting his fastest lap on lap 11, 1m 26.683s, breaking away from the group and started to reel in Rea and G.Irwin. The gap came down and Peter took Rea coming into the last lap, taking 9th place, in pursuit of Irwin. A positive end to a tough race.

Race Three – 20 Lap
Declared a wet race although the rain had stopped and a possible dry line appearing. Starting 12th on the grid, Hicky took the bold move of going full slicks, which would pay off if no more rain appeared to spoil his plan. 10 laps in and Hicky was making a move lapping 3 seconds a lap faster than the front runners. But, Rea stopped play when his engine blew on the start-finish, causing a red flag!

The race restarted for a 7 lap sprint race. Peter started 16th and fought through the field gaining 3 places in the first lap and up into 9th place on lap 3. By Lap 4, Hicky had gained 9 places and his fastest lap, 1m 26.251, on lap 6 and he crossed the line in 7th.

Peter: “Tough weekend for me at Brands Hatch and wasn’t the weekend I wanted or needed to be honest.
We had a good pace on Friday and I was quite happy with where we ended up.

I did have a few issues with the bike, just the set-up, nothing mechanical, I couldn’t get the bike to do what I wanted it to do. However, we finished up 9th on Friday in FP2 in the dry 0.4 would have put us 3rd so weren’t too far away.

Qualifying was mixed, was happy with a second-row start, front row is where you want but we always aim to be, in the worst case, on the front two rows.

From that point, it all went wrong!

Somehow we did a clutch at the start of Race One, the race was red-flagged so we were able to swap it. Of course, I would like to extend my thoughts to Brad Jones and his family, I really hope he pulls through, a nasty accident and fingers crossed for him.

On the restart and I was then too cautious and I made an average start, in with the pack and getting bullied really. I was battling with Lee Jackson on lap two and somehow high-sided coming out of Surtees, not really sure what happened, no real obvious mistake apart from on a slightly different line to normal as Lee was there, but I was not expecting to high-side, I went over the top and landed hard.

The team did a great job working on the bike overnight, ready again for Sunday.

We had a wet warm-up session, which was a shame as we didn’t get the data we needed from the dry conditions from race one. So we had to go into race two with the set-up we had from free practice.

Race Two, I really struggled with the bike, got knocked back again in the pack, fought back through to 9th, but not on the pace I needed it to be and the bike not doing what I wanted it to!

Onto race three, a wet race, but a few corners were dry and I went slicks front and rear, it was the right choice. After 5 laps there was a dry line, lapping 2 or 3 seconds a lap faster than the rest of the field, so with 10 laps left we were in a good place, even so far back.

Really disappointed it got red-flagged!

The restart, starting back in 16th after everyone was allowed to change tyres, which then was even more frustrating as we had made that choice before.

Finishing 7th was ok, wasn’t what we were here for, we wanted 3 podiums this weekend. So another tough weekend. Points on the board could just do with lady luck shining our way.

I’m happy with the team, we changed some things for the final race and it was definitely better, so we have learnt from that and moving forward, looking forward to Thruxton a strong round for me in the past, the fastest circuit in the UK and as you all know I like speed, so looking forward to that.

Awesome to have the fans here this weekend, even in the pouring rain, still loads of people, it really does improve BSB having all the fans back so a massive thanks to them. Thanks to the team and all my sponsors and looking forward to seeing you all at Thruxton.”