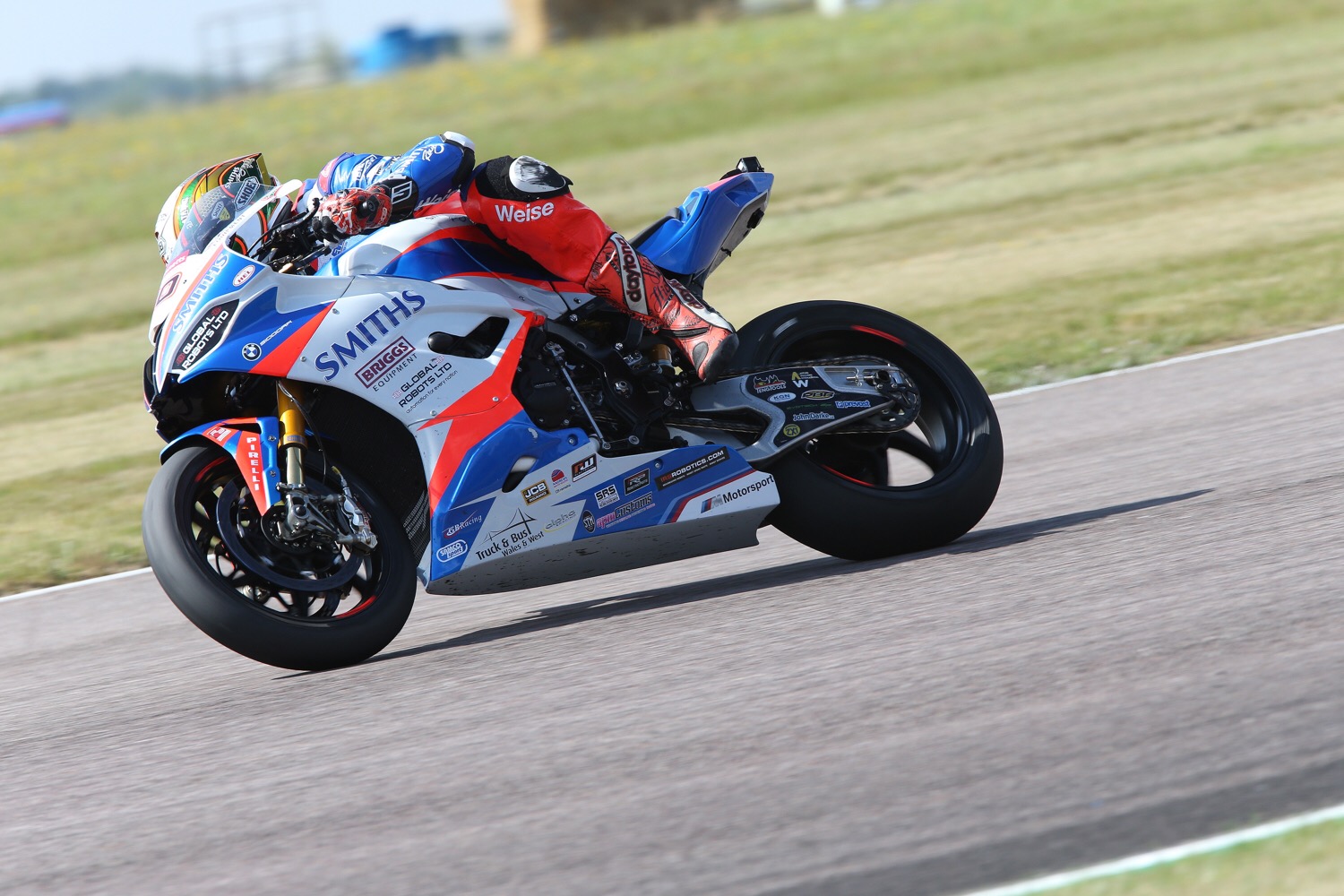 Peter Hickman rode to a fifth and a third place in the two races comprising the seventh round of the British Superbike championship at Thruxton last week.

The weekend did not go without incident as on Sunday morning his race leathers were stolen from his motorhome. Luckily he had a spare set as he had his road racing leathers with him ready for the Ulster GP but the theft must have affected his mindset as he prepared for the two difficult races later in the day.

Hickman had been on the pace throughout the weekend and was the fastest rider in free practice on Friday. He sailed through qualifying which earned him a front row start to the first race on Sunday.

As the lights went out he got a swift start and got the hole shot through the first corner. He was battling for the lead with Andy Irwin, exchanging places with the Honda Racing rider throughout the first lap and dropping down as far as fourth in the early stages of the race. On lap 10 he had a second wind and made it back to the front, but on lap 14 Irwin demoted him to second and then he dropped back to fifth as he battled in the large group of riders all challenging Irwin. Unable to make it back to the front Hickman had to be satisfied with fifth place at the flag.

Starting the second race from the third row Hickman moved up into second place on lap four and was catching Josh Brookes for the lead when the race was red flagged because of rain.

At the restart, run over 13 laps Hickman got the hole shot and was involved in a six rider battle for position when, on lap seven, Glenn Irwin crashed with his machine dropping oil on the track causing a second red flag.

After a lengthy delay the race was once again restarted, this time an eight lap dash to the flag and the action at the front was fast and furious. Hickman was second on the first lap then dropped to fourth again battling with Irwin. Brookes had got away in the lead leaving Hickman, Bridewell, Irwin and O’Halloran all fighting for the second place. Hickman was holding second until the final lap when Irwin passed him but he hung on to third place at the flag to pick up 16 championship points.

Peter Hickman: “We have been fast all weekend the bike is running really well. Race one didn’t quite pan out the way we had planned, we were looking good until someone tried to pass me at the chicane and I ran across the kerb and all of a sudden I was a second behind the front four.

In race two it was really hard with the stop start situation. But I had a good race with Andy Irwin involving a bit of fairing bashing! Unfortunately we are a bit down on power with the Smiths Racing BMW; fingers crossed that BMW can sort me an engine sooner rather than later!”

With Irwin beating him in both races Hickman now drops to eighth in the rider standings on 123 points but he is closing in on Fores who is now just nine points ahead of him in seventh place.