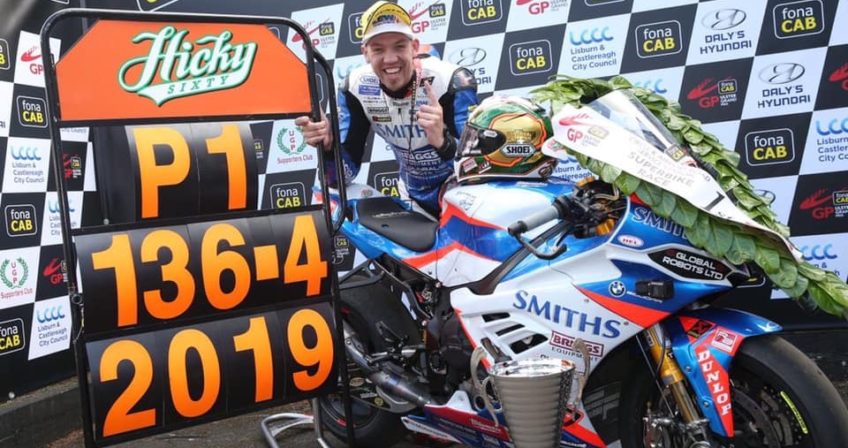 International road racer Peter Hickman dominated proceedings at the Ulster GP winning his two races on Thursday and going on to win the five races on Saturday making history with a seven win haul plus a new lap record for the 7.4 mile Dundrod course.

After setting pole position in all three classes at the 2019 Ulster GP Peter Hickman got off to a fantastic start by taking the win in the first Superbike race on Thursday, smashing the outright lap record with a 136.415mph lap on his way to victory aboard the Smith’s Racing S1000RR BMW. The new record is 2.6 seconds faster than the old one and almost one mph quicker than his TT record of 135.452mph upgrading his fastest road racer in the world record by over a second.

Hickman commented: “I was struggling to pass Dean (Harrison) in the early stages as he was really fast in a straight line and we’re down a bit on top speed. I got a really good run out of the last corner and used the slipstream perfectly along the Flying Kilo so I knew if I could get to Deer’s Leap in front, I’d have a good chance of getting away. Once I got the clear track, I could ride my own lines, rather than Dean’s, and I hit all my markers so was able to pull away. We don’t have the fastest bike out there but we do have a very good package so it’s great to get the win and get the outright lap record back for myself, the team and BMW.”

Hickman went on to make the double with victory in the Supersport race later on Thursday evening on his K2 Trooper Triumph by Smiths Racing, winning a huge tussle with Lee Johnston. The battling pair frequently exchanged the lead on the final lap with Hickman taking the win by the smallest of margins. (0.3s).

Saturday’s racing was delayed by rain and mist and the six lap Superstock race finally got away at 1pm with Hickman adding to his tally of wins by cruising home over 24 seconds ahead of Davey Todd.

Next up was the Supersport race which was run in wet conditions. Hickman took the lead at the start and pulled away leaving rooster tails off the back of the Trooper Triumph as he streaked away to once again record yet another win with an advantage of 8.3 seconds over Lee Johnston.

In Saturday’s first Superbike race Hickman followed Dean Harrison through the first lap before taking command on lap two. He crossed the finish line for the win with a three second advantage over Harrison.

The second Supersport race of the day was a close and exciting race with Hickman and Lee Johnston battling it out throughout the six laps with Hickman crossing the finish line just a tenth of a second ahead.

He said: “I had a problem on the first lap when my filler cap came off covering me with fuel.  It was a close race between us but I just got over the line ahead of Lee.”

The final race of the day was the Superbike race and Hickman led from lights to flag crossing the finish line with an advantage of 6.8s from Dean Harrison to rewrite the history books with seven wins from seven races.

“It’s been an awesome week and the team has been phenomenal. The bikes have been faultless, and I can’t thank them enough for what they do for me. They’ve built some awesome bikes and although I try to win every race, to have actually achieved that and end the week with seven wins from seven starts is something I never really thought I’d do. Conditions have been tricky today, but the organisers made all the right calls and I tried to get to the front as soon as I could in each race. Once I’d managed to do that, I was able to pick all my own lines and hit all my markers but whilst I was able to make the break in all of the big bike races, I knew it would be difficult to do that in the Supersport races. The Triumph had really good corner speed and handles perfectly so to win both of those races in the manner I did was brilliant. It’s just been a superb week and to create history like we have is testament to everyone at Smiths Racing.”

Amongst the accolades Hickman received he unsurprisingly won the Darren Lindsey Trophy awarded for Man of the Meeting.

Hickman returns to domestic duties now with a visit to Cadwell Park this weekend for the eighth round of the British Superbike championship. The timetable is: Friday – free practice 10.15am and 3.15pm. Saturday – free practice 10am, qualifying 4pm. Sunday – warm up 9.35am, race one 18 laps 4pm, race two 18 laps 4.30pm.