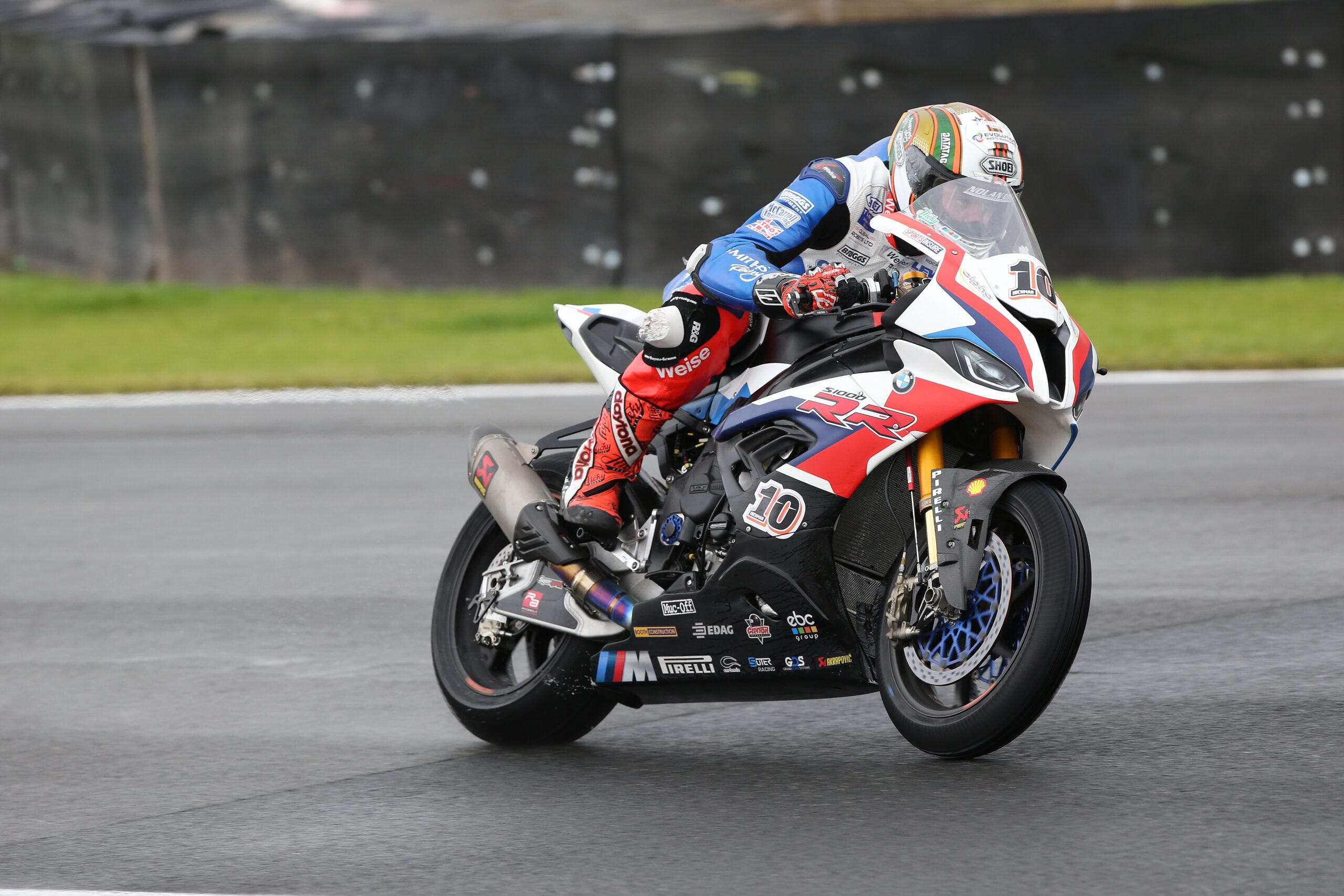 Peter Hickman rode to a superb seventh place in the first of three World Superbike races for Shaun Muir’s BMW Motorrad team at Donington Park at the weekend but sadly retired from the Superpole race with a mechanical problem before heading back out on track for race three where he once again scored championship points for 11th place.

Hickman was drafted in to the team at the last minute to replace regular rider Markus Reiterberger who was hospitalised with a serious bout of flu.

The Lincolnshire rider completed his free practice on Saturday in warm sunny conditions and recorded his fastest ever lap around the Leicestershire circuit with a 1m 28.567s and went into qualifying in damp conditions securing a second row start as fourth fastest competitor.

But Saturday’s first race was run in wet conditions and Hickman was naturally apprehensive having not ridden the BMW Superbike in the rain. But he knuckled down and completed the first lap in eighth position. He passed Toprak Razgatioglu on lap two and remained in seventh position for much of the race until being overhauled by Leandro Mercado on lap 11. But in a twist of fate series leader Alvaro Bautista crashed one lap later and Hickman was back to seventh place which he held to the chequered flag to be awarded nine world championship points.

Hickman: “I am really happy to be in the top 10; it’s a great result for me and the team, especially as I had not ridden the bike in those conditions before. It was fully wet for the race which was a bit of an unknown for me. The start was not the best as I fell back to about 10th but I fought my way back through to seventh. I am really happy with the bike; I am still learning and trying to understand what the bike will and won’t do, especially with the electronics. But I am happy and so is the team so it’s all good.”

The short 10 lap Superpole race was run on Sunday morning with Hickman starting from the second row. But the race ended badly for Hickman as, while running in 12th place his BMW encountered an engine fault and he reacted quickly to pull off across the grass to avoid further oil spillage. Unfortunately four or five other riders joined him as they slipped on the oil which immediately brought out the red flag.

Starting the final race from the fourth row in 11th place Hickman held his position throughout the 23 lap affair to pick up a further five world championship points.

Hickman: “I was struggling with rear grip in that last race. There was not really sufficient time to make the changes on the bike based on what we had learned in the first race due to what happened in the Superpole race.  But overall I think I did a good job for the team and I have to thank Sean Muir and BMW Motorrad for giving me the chance to race at world level this weekend. I must also thank Dunlop UK for releasing me from the event I was to do in France plus of course my Smiths Racing team for their support. It’s been a good experience for me this weekend to work within a World class team and I have really enjoyed it.”

Peter returns to British Superbike action next weekend, July 19/21 when the series pays their annual visit to Snetterton in Norfolk.

Be the first to comment “WSBK Donington Park” Cancel reply