PODIUM AND A POLE POSITION FOR HICKY AT OULTON PARK! 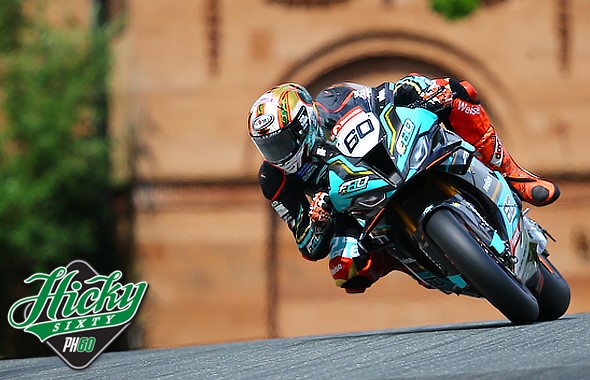 The British Superbike season kicked off at Oulton Park this weekend for Peter Hickman and the FHO Racing team with the all-new M 1000 RR.

FP1 was wet and Hicky took it steady, FP2 the track was drier and Peter made use of the drying track to get the bike set up ready for FP3 on Saturday.

Saturday; the track conditions were ideal, allowing Peter to get a strong qualifying time and finished P5.

Peter “I’m really happy with qualifying, I’ve never been a strong qualifier throughout my career and to come away with the P5, 0.2 off pole I am more than happy with that.”

Hicky had a good start, he and the top five broke away from the rest of the field, feeling comfortable with the bike, the race pace was great. Hicky felt strong, having a few battles in the first half of the race, Peter went on to ensure a good P4 after having a few issues in the latter stages.

Arm pump issues around lap 12, meant Hicky had to ease off, knowing he had a gap to P4, securing the first Podium for Faye and the FHO Racing BMW team and Pole position for Race 3.

Another great start, mixing it up at the sharp end but similar issues to the previous races, Hicky ended up dropping back to 5th, finishing the weekend in 3rd place in the BSB Championship for Hicky and the FHO Racing BMW Team

If we were offered a 4th 5th and podium from the weekend before we got there, we would have definitely taken it, especially when I was struggling with arm pump really badly this weekend, which is unusual for myself. I felt I had the pace to have been on the podium for all three races, if not to win one or two. That’s the way things go, but I will work to get that sorted before the next round.

So leaving here on a positive, the bike has worked really well and shown its potential and it is only round one for us and look forward to getting to Knockhill

Finally, wishing my teammate Xavi all the best and look forward to getting him back with the team for Knockhill.”